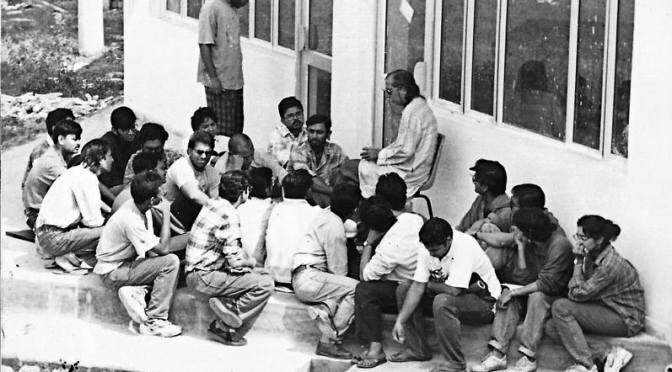 Gudh reminisces those childhood memories, which perhaps everyone went through in life. Those obscure moments etched into our memories, which we find hard to correlate as grown-ups. It’s about Ajay, his childhood, his love for his mother, his village, its ongoing revolution and the changes it brings forth.

Ashok goes back from city to his village with an Agenda. At home he discovers that his parents have chosen for a bride for him. Caught between the dual realities of orthodox village life and his progressive city life he struggles to speak his mind

Divya, a 17 year old school girl realizes that she is pregnant from her estranged boyfriend. Disregarding her family and school obligations she sets out to find and claim him back to her life.

An old couple, in their seventies, lives in a village, waits to see their daughter and grandson. But the only daughter who lives abroad with her child is reluctant to come back to her parents. Meanwhile the boatman in the village fails to solve the disagreement with his young wife. She leaves the one year old son with the boatman and goes away from the house. The decision taken by the boatman to overcome the dilemma changes the world around the old couple

Named after the legendary film maestro Satyajit Ray, the Institute has emerged as a national center of excellence which offers post-graduate program in Cinematic studies.

SRFTI has succeeded in articulating and disseminating classical and contemporary theories of praxis for the creative minds to leap into the world of professional practice : be it mainstream, parallel,art-house, experimental or non-fiction narratives.The Institute has crossed many mile stones towards a new paradigm of the art and craft of Film making.

Alumni have been winning accolades regularly through their mastery over film-making. They have been trendsetters, changing the course of film-making through the fusion of thought, craft and entrepreneurial abilities. By proving their mettle as dedicated professionals, they have increased the acceptability of current students in the complex and competitive world of film-making.

With state-of-the art facilities, SRFTI provides a creative ambiance to inspire the budding film makers with an innovative language of artistic expression.

And their contribution builds the blocks for better Cinema.

Student’s films winning national and international awards and selections at the most prestigious film festivals of the world is a regular feature at SRFTI’s achievement graph.

As one of the largest stand-alone film school campuses in the world SRFTI is situated on the eastern fringe of the city of Kolkata. The.The extra-ordinarily sprawling green campus offers an array of perfect setting for the audio-visually driven minds. The lakes, the ponds,the lush green velvety spread…… provide an idyllic creative space, serene and sequestered, to lend euphonies of creative spark. It is a space that provokes, inspires and prepares you to undertake your audio-visual odyssey with confidence and conviction.