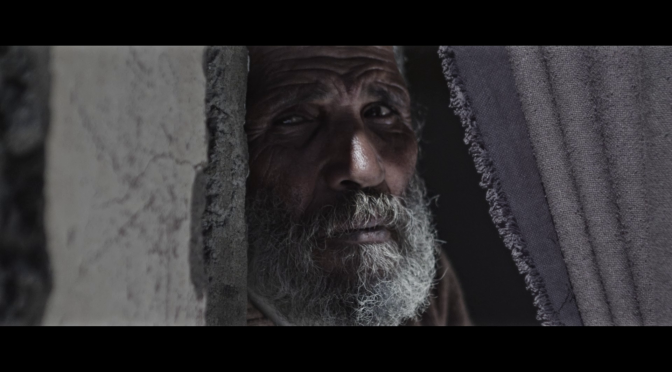 VENDREDI, a young black African boy walks alone in the desert, and meets WHITE MAN. Both they go into a journey into nowhere. Vendredi wants to make Circus in Morocco. White Man wants to assist to his grand daughter’s wedding. During their travel, their relationship goes higher and very deep. Vendredi gives the whole innocence and bravery he has, and saves White Man from a mine and pulls him for long distance till an army stops them.
Vendredi becomes a soldier after White sells him as a simple object. Finally Vendredi becomes a new terrorist with ISIS. He becomes Oliver Black.

Tawfik Baba is a filmmaker based in Ouarzazate city, in Morocco. He studied French literatures at the university; then studied Directing and screenwriting skills at the French School of Arts and Medias STUDIO M in Casablanca. He also studied Spanish Language and Accountancy. Since teenager he loved writing, and tried to write whatever as poems, short stories and philosophical essays. As living in Ouarzazate, He worked in a lot of film shootings as Kingdom of heaven, Rules of engagement, Cleopatra, Babel… etc, in many different departments. In 2013, he got the fund of the Moroccan Cinematographic center as a screenwriter in a short “Ten dollars”, then he got the same fund in 2014 for another screenplay of short “ The ring”. He wrote and directed his first short Epitaph in 2013, and then four others will follow: Winter time, Sand man, Routine, Clowns, and a feature pilot The lake House. In 2017, he wrote and directed his first indie Feature: Oliver Black released in 2020 .

When you just go through some lonely streets and see some foreign guys from Mali, Senegal, Ivory Coast or Burkina Faso…begging and asking strangers for a piece of bread or some money to feed themselves or their kids… When you just walk and fade into your own warmth and touch your cold heart and feel it sad. Thus you know: A new age of slavery is raised. A slavery chosen by their own free will. They dream to cross the boarders and cross the sea to reach Europe and make a beautiful tomorrow, but they stuck here. And little by little, their dreams fade away and they give up, and leave only a profound hidden tear in their beautiful eyes. In the other side, I see us, like that lizard, which witnessed those sad gloomy stories and can’t talk, like Mama Africa, can’t talk… This is how Oliver Black invades my thoughts as a writer, then as a Director.

I just tried to tell a story where I am silent. To tell a story of a journey where childhood is taken from its innocence, and where dreams can be bigger than a whole nothingness in no man’s land. Once in 1963, someone said “I have a dream!” and made it an endless hope for all the humans… But now, it becomes Friday, a used and a slaved everlasting character.
I tried to tell others, that something is happening. We’re losing our humanity, we’re losing our dignity and we just pretend we’re Ok, and we’re not. I wanted to tell that we need to stop being machines waiting to be manipulated by other machines of economy, money, war, terrorism and politics… As much as I know I am just a little single lonely voice with a very bad ugly tune to sing a freedom song.