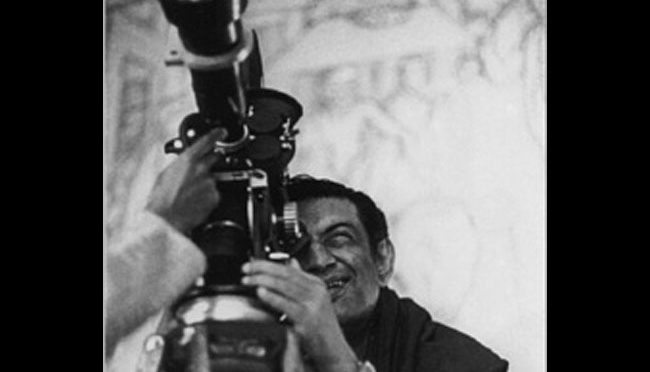 Photographer Nemai Gosh has spent 25 years of his life having as main subject world-renowned Indian director Satyajit Ray, and his film sets, his castings and surrounding magic and glamour. Today, he confronts for the film the peculiar fascination which still inhabits him for this artist and exceptional man,  recalling memories of Ray’s genius at work, of his capacity to conceive and decide all about every step of the film creation and production, of his temperament of perfectionism and passion, which led him to international recognition way over Bollywood standards.

Through 90,000 pictures made by the unique witness, so as while his meeting again with the director’s usual movie team, or his return on famous films shooting locations and meeting the locals who then met the master, we embrace Satyajit Ray’s personality and oeuvre, picturing as well how a page of Indian cinema’s history was written by this man.

Saxophonist and composer Bo van der Werf is graduated from the Amsterdams conservatory, he leads and writes for Octurn, a contemporary jazz ensemble based in Brussels. He also plays with the Brussels jazz orchestra, leads his own smaller ensembles and plays free-lance with different groups in Europe, besides writing for Octurn, Bo also composes music for films, for dance and for contemporary classical ensembles, teaches at Antwerp’s and Leuven’s conservatories. He currently works on a doctorate research at Leuven University. ‘ My life with Satyajit Ray’ is his first film, and it was shown at many major film festivals ( Teheran film festival, Buenos Aires film festival, Bombay international film festival, festival du documentaire de Paris, Tiburon film festival California, mediawave Budapest , Kolkata film festival, … ).