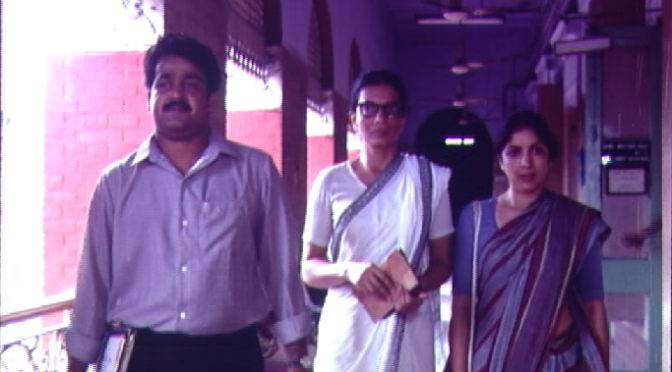 The film is set in Calcutta. The story tells of Venu (Mohanlal), a Malayali officer in the rehabilitation ministry of the Andaman Islands, who selects candidates for a refugee aid programme enabling them to settle in the islands with state assistance. He meets an old Bengali widow (Mitra) who is not eligible for the programme, but he discovers that she is the abandoned wife of his uncle from Kerala. Re- establishing family links, he also befriends her hostile daughter (Gupta) and her son, a political refugee. Their brief acquaintance ends at a shipyard where he hoards his emigrant refugees on deck and leaves for the islands once more.

From its remarkable opening sequence, as the camera tracks through abandoned refugee shelters built during the 1943 famine and Partition, with a voice-over in Malayalam recapitulating that tragic history and the Kerala peoples’ commitment to the plight of the Bengalis, Aravindan makes clear his intention to transcend a localised and increasingly cynical view and to move towards something like a national perspective on the contemporary. In the process he also abandons much of his early pictorialism in favour of e.g. the remarkable shots of Mohanlal walking through the crowded Calcutta streets, or standing on the terrace of his cheap hotel, and especially in the last sequence aboard an ancient and grossly overcrowded ship overrun with impoverished refugees, as Venu tries to bring some order into the chaos. Several well- entrenched naturalist conventions, however, prevent a further formal elaboration of the style, such as the dialogue problems (Mohanlal speaks in Malayalam and English, Neelanjana Mitra in Bengali, highly accented Malayalam and English, and Neena Gupta only in English), but the acting is uniformly in tune with Joseph’s deliberately rough-edged camera.

(1935-91) Govindan Aravindan. Malayalam director, painter and cartoonist with an idiosyncratic style. Born in Kottayam, Kerala; son of the literary humorist, Govindan Nair. Worked as caricaturist for the Mathrubhoomi journal (1961-79), drawing the cartoon series Small Man and Big World, chronicling the adventures of Ramu, its corruptible proletarian hero, and Guruji; later did an occasional cartoon strip for the Kala Kaumudi journal, called A Bird’s Eye View.

His published cartoon collection (1978) highlights a change in drawing style in the early 70s, emphasising large blank spaces and characters almost disappearing below the frame.

His films are known for their distinctive look, sparse naturalism, silences and long shots with darker shades of grey in b&w films. Film society activist in Kottayam and Calicut. Early work was the only consistent cinematic manifestation of late 60s Calicut-based modernism represented particularly by artist Devan, the playwright and satirist Thikkodiyan and the writer Pattathiruvila Karunakaran (who produced Uttarayanam). A major influence on this group was the spiritualism of satirist and political activist Sanjayan. Later, like the visual artists associated with the Kerala Kalapeetam in Ernakulam, Aravindan combined this influence with the new, more mystical direction taken by K.C.S. Panicker’s (1911-77) paintings (cf. Kanchana Seeta).

His faithful producer and distributor, Ravindran of General Pics, ran a family business in cashew nuts. Worked at the Kerala Rubber Board throughout most of his film career. Also stage director, working in association with the playwright Srikantan Nair, after which he helped start the Navarangan (in Kottayam) and Sopanam theatre groups, staging e.g. Kali (1964) and Avanavan Kadamba (1976) using musical forms derived from the work of Kavalam Narayana Panicker, who later collaborated on the scripts of Kummatty and Estheppan. Noted actors associated with this group were Gopi and Nedumudi Venu. Also trained in the Kirana-style Khayal. Occasionally music director for other film-makers: Yaro Oral (1978), Piravi and Ore Thooval Pakshikal (both 1988).