I AM BONNIE, Dirs. Farha Khatun, Satrupa Santra, Sourabh Kanti Dutta | India | 2014 | 45’
Bonnie(33) is again on the run. He has been on the run from his family and sports fraternity since failing ‘sex test’ before the Bangkok Asian Games, 1998. A born hermaphrodite, raised by poor, illiterate and confused parents as a girl named ‘Bandana’, s/he became one of the finest strikers of Indian Woman’s football team in her/his short career. A Sex Reassignment surgery later transformed her/him to a man but left him without home or career. He left home, took up idol-making for a living.He met Swati(24) then, married soon and moved once again fearing social backlash. His fight to establish his identity, struggle for existence met by a sarcastic society yet to learn to take ‘other genders’ seriously. 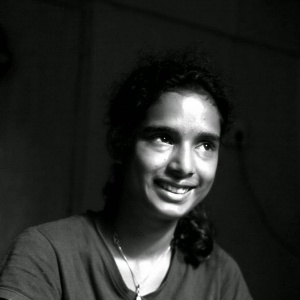