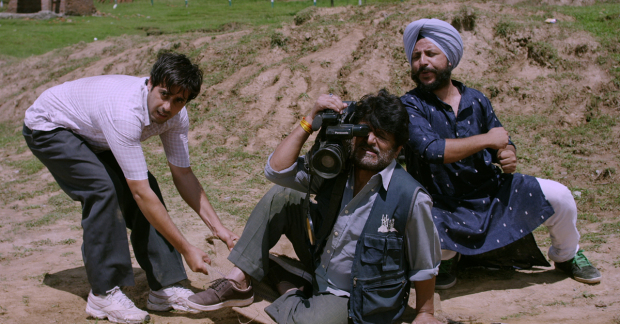 A comedy about Kashmir? Probably not. Well, not at all. The latest film by director and co-writer Rahat Kazmi is a delightful, charming and poignant drama about growing up in a conflict zone. Between the bombs and the bullets, a group of college friends are trying to get the most out of their lives but they need their downtime… like anyone in that situation. Focusing on an intrepid group of four friends (following the style of “Inbetweeners”), are bond by the love of cinema, they get together to buy VHS Bollywood movies but when the prohibition of TV and movies appears (as happened in 1994), the four friends are not to be defeated. What happens then is fun, totally believable and very entertaining. It ends perhaps on a more tense posture. But as Kazmi said at Mantostaan’s presentation at last year’s festival, “it’s a beautiful place with intelligent, cultured and educated people. They deserve the best. And this movie is a love letter for the people of Kashmir, and one that will touch a lot of people”.

Rahat Kazmi is an internationally acclaimed director known for his hard hiting films like Mantostaan and Identity Card. Rahat has won many international awards for his film including Best Director at London Asian Film Festival 2017 for Mantostaan, Best Director and Best film at San Francisco Global Movie Festival 2014 and also Rahat’s feature Identity Card’s scenes were shown at Europian Parliament as a reference for debate on Kashmir conflict.